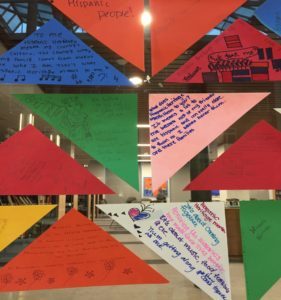 As a representative of KIND, I attended a celebration to honor Hispanic Heritage Month at a high school in Washington, DC, with which KIND is partnering on our Voices That Matter Most project. I was thrilled to have been invited to attend and listen to the stories of three minors who beautifully described their journey and integration to the United States.

Upon entering the school’s atrium, I could immediately feel the warmth and pride of the students, teachers, and members of the community. Brightly colored posters filled the space to honor Hispanic Heritage Month and the aroma of home cooked food filled the air. After mingling with some of the students and meeting their families, the school’s English teacher asked me to help her translate the significance behind the event, the inspiration behind the stories that were going to be shared, and the “Voices That Matter Most” project.

The first student who presented was a young girl from El Salvador who shared her speech in English and Spanish. Although a bit nervous at first, she described the circumstances that led her to come to the United States. From the time she was seven months old, she lived with her aunt and uncle, since her mother could not take care of her at the time. She grew up with them and considered them her parents until their untimely death when she was 11 years old. Due to growing threats of violence in her community, it was decided that she should go to the United States. She eventually arrived in New York where she met her mother for the first time since she was seven months old, and her siblings. She met kids from other backgrounds and nationalities at school, which she fondly remembers. They then moved to Washington, D.C. Her dream is to attend Columbia University and be a softball player.

The second student, also a young girl, beautifully described through poetry the difference between living in the United States and her country. She described being able to play outside in her backyard without fear or a care in the world. Here, however, she said the park was far away and she was afraid to go. She said that she wants people in the United States to understand the reasons they are in this country. Excerpts from her poem:

Do you think to came here is easy to us? Do you think is easy leave children brothers sisters? You can’t image how parents cry at night for the family and friends, missing persons so sacred to be so far away.

Please don’t put labels on us, we are humans after all. Be proud of who you are, cause a color, country, race or religion never will define you.
The last minor was a young man who shared a brief speech describing his journey here as “difficult”, and that he hopes living here will help strengthen his relationship with his father. He also hopes to continue learning how to make friends, learn English, and adapt to a new culture so different than his own.

Once the speeches concluded, attendees continued eating and dancing. The school’s dance team also performed along with songs from the late Tex-Mex singer, Selena Quintanilla, as well as some bachata.

This moving celebration of Hispanic Heritage Month reminded me of the important and valuable contributions the Latino community continuously make in this country.