This child’s father approached me af 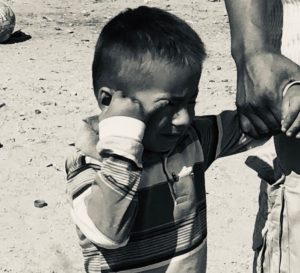 ter the Know Your Rights presentation offered by a local attorney in Juarez in July 2019. He handed me his child, who didn’t seem strong enough to resist my touch. He begged me to help the boy. “My son is not eating much anymore. He’s also barely talking and he’s lost weight,” he said. “He used to be very active, but not anymore.” His son was 3, though he looked much younger to me. He looked lost and did not respond to his father’s kind words or my best efforts to get him to at least make one small facial expression. There was none.

Having fled severe persecution in Honduras, and facing an immigration court hearing date in January 2020, the father is hopeless and grappling with the lack of resources for his son. He may give up on his asylum case, he said, because he can’t let his son die. But the journey home means terror and uncertainty and that choice too seems to be an impossible one. This child’s suffering is a direct result of the Trump Administration’s Migrant Protection Protocols which is forcing asylum seekers, including thousands of families, to remain in unacceptable and very dangerous conditions in Mexico. The MPP is denying them their legal right to seek asylum and remain in the U.S. where they can receive care and support by the NGO communities during their proceedings. This child’s suffering is cruel and absolutely avoidable.