One of the many challenges presented by the pandemic for KIND staff has been the inability to meet in person with our clients.

I was thrilled when I finally got to meet face-to-face with a client I had been working with for two years.

We met at a local library. Upon laying eyes on each other, we immediately hugged. Janeth was brimming with energy. She was taller than I expected. Her bubbly personality came alive, but what stood out the most was her fortitude, which was not directly evident through our video calls. Yet, it was there all along laying just beneath her friendly exterior, almost like an invisible shield.

I first started working with Janeth shortly after the pandemic began. We met on a WhatsApp video call. She was friendly, giggled a lot, and open, immediately sharing that she identified as a member of the LGBTQ+ community. This was not an insignificant detail for someone from Honduras — where it is not ok to be gay – to reveal, especially during a first meeting. There were many more meaningful revelations to come. She told me her story slowly, layer by layer, like peeling an onion, drawing deeper and deeper from her memories as she became more comfortable and began to trust me.

I would come to learn through many additional video calls that despite all the suffering she had experienced, she had remained true to herself: friendly, outgoing, and determined.

She told me her story slowly, layer by layer, like peeling an onion, drawing deeper and deeper from her memories as she became more comfortable and began to trust me.

Surviving through Strength and Resourcefulness

Janeth has been through immense trauma both in Honduras and in the United States. Towards the past school year, she was wrongfully committed to a mental health facility against her will by her local high school. During a meeting with the school counselor, she expressed being sad. The school sent her to a nearby hospital for an evaluation. However, the evaluation was not conducted in her native language, even though she tried to explain that she didn’t understand what the hospital staff was saying. This led to her being involuntarily committed. Her inner strength and resourcefulness helped her remain calm and levelheaded throughout the ordeal. Her cell phone was confiscated, but she made sure to save the telephone numbers of a few key people who she called for support and kept in contact with during her entire stay.    A comprehensive assessment was finally performed in her native language, and after six days, she was released.

Many systems and people failed Janeth throughout her life, some despite good intentions and others whose carelessness harmed this child entrusted to their care. So many people who were supposed to protect her, did not.

Janeth’s case resonated with me and my personal history. When I was an adolescent, I was left alone in a variety of difficult situations, forced to navigate them on my own. I am all too familiar with the vulnerability and potential for harm and abuse children alone face. I don’t want to see any young person be forced to go through any similar circumstances alone.

Though she is not unaffected by the harm she has suffered, Janeth continued to fight for what she wants from life. Janeth was upset with the school administrators for sending her to the hospital and dreaded returning to school to face students who saw her being placed in an ambulance. She had made it clear from the beginning of our relationship, however, that she wanted to attend college and possibly graduate school. She was only a couple months away from graduating high school, a huge milestone. Ultimately, she decided to face her peers and finish up the year to achieve her goal. It would have been easier to use the experience as an excuse to drop out and start working full-time to support herself, but that is not who Janeth is.  She graduated in June 2022.

I have learned so much in my life already. 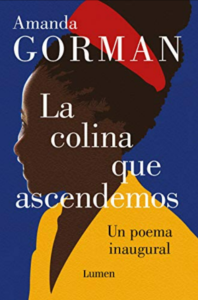 After we finished our first in-person meeting, Janeth asked me if the library had Spanish language books. A librarian walked us over to the Spanish language adolescent section. Janeth was ecstatic and smiled broadly. Upon setting her eyes on a bilingual version of Amanda Gorman’s book The Hill We Climb/La Colina Que Ascendemos, she squealed and picked up the book to start reading it. She recognized Gorman’s face on the cover and immediately asked how she could borrow the book. I left Janeth to peruse more books and went to the front desk to investigate. Janeth was able to obtain a temporary library card using her student ID. I helped interpret the application. Janeth was insistent that I ask the librarian how many books she could borrow at one time because she was positive she would finish Gorman’s book very quickly.

Janeth selected one more book to borrow, He Vivido Tan Poco/I Have Hardly Lived by Eva Heyman. It is the diary of a 13-year-old Jewish girl during the German occupation of Hungary before she was murdered in the Holocaust. Janeth chose this book because, “I also have hardly lived, but I have learned so much in my life already.”

That day, Janeth revealed another layer of herself, one that grounds her inner strength and resilience.

Janeth loves to read and has read books throughout her life. She said they offer her lessons and have helped her get through all that she has suffered.  She also writes. She has written every day since she arrived in the United States. She was given a journal while at an Office of Refugee Resettlement shelter, which she still has, and continues a daily writing practice, aware that it helps her process her feelings, especially when she is sad or has a bad day.